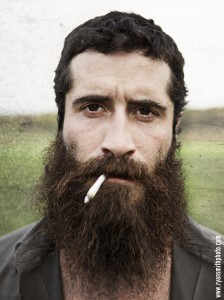 JP Harris plays Country Music. Not Americana, Roots or Folk. Pure country. In a world where prefixes have been added to the term ‘County’ JP sticks to the old-fashioned sounds of a music that has influenced four generations of songwriters.

Like his music, his backstory is pure country. He left home on foot at the age of 14, travelling via thumb and freight train, living the next four years from a backpack, tarp and bedroll, working as a farm labourer, equipment operator, lumberjack and carpenter. He wound up in Nashville and released his all-original debut ‘I’ll Keep Calling’ in May 2012. Shortly after it’s release, without the aide of publicists or a large label’s bankroll, it won “Best Country Album of 2012″ from The Nashville Scene, the same honor at the Independent Music Awards, and, in JP’s own words “a whole mess of other stuff in the papers and on the internet.”

He comes to The Balor with his 5 piece band The Tough Choices – young local Nashville players who have spent thousands of miles with JP on the road. The gig is part of a European tour promoting his latest album “Home Is Where The Hurt Is” recorded and mixed at Ronnie’s Place (formerly the personal studio of Ronnie Milsap) in Nashville. Lending a hand on the album vocally is long-time friend Chance McCoy, singer and guitarist of Old Crow Medicine Show (McCoy also took rhythm and lead guitar in addition to fiddle duties throughout the album.)

If you like your country music pure, unadorned and unapologetic this is the gig for you.