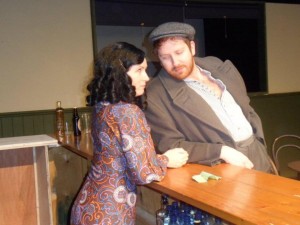 With the support of the International Fund for Ireland (IFI) the Balor DCA in partnership with the Alley Theatre, have created four drama productions examining contentious subject matter in our shared past, including one based in the Plantation period, another examining issues surrounding the Fair Day the third exploring the legacy of WW1 for veterans, and our last production based on the theme of emigration.

These productions have been used to shed light on these key historical events and to begin discussion amongst members of the audience in terms of the legacy of these events for our modern society.

For the last six years the Balor DCA have produced in-house and touring productions, some of these are:

Looking at Benbulben by Francis Harvey,

Wherever I Lay My Head,

Stand By Your Man by Samuel French,

Women on the Verge of HRT by Marie Jones,

Friends and Neighbours by Austin Steele,

Sink or Slim by Sam Cree,

Juno and the Paycock by Sean S. Casey,

Far Off Fields by Jonathan Burgess,

The Parting by Jonathan Burgess,

The London Vertigo by Brian Friel,

The Sound of Music by Russel Crouse and Howard Linsday,

The Country Boy by John Murphy,

The Loves of McGuire by Brian Friel,

Knives in Hens by David Harrower,

The Playboy of the Western World by J.M. Synge,

Sive by John B. Keane.