Winner Takes It All

Winner Takes It All 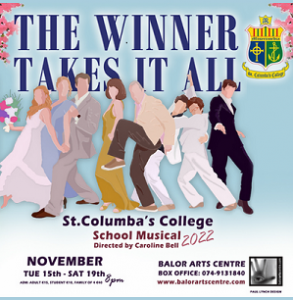 This years St Columbas College, Stranorlar School Musical is a musical comedy about a bride to be trying to find her real father told to the soundtrack of ABBA’s greatest hits.

Sophia Sheridan (Madison McMenamin) is 20 years old and lives with her mother Donna (Ella McLaughlin) on an idyllic Greek island. Her one wish is that her father be the one to give her away on her wedding day. There’s just one problem – she doesn’t know who her father is and her mother isn’t telling.

The discovery of her mothers diary from the year she was born yields some clues allowing Sophia to narrow the candidates down to three. Sophia is convinced she’ll know her father as soon as she sees him and invites the three men to meet her. Cue chaos with a furious mother, a disgruntled fiancé and three prospective fathers convinced that any one of them could ‘Be That Guy.’

After a three year hiatus get ready for another unforgettable musical production from the students and staff of St Columba’s College, Stranorlar.