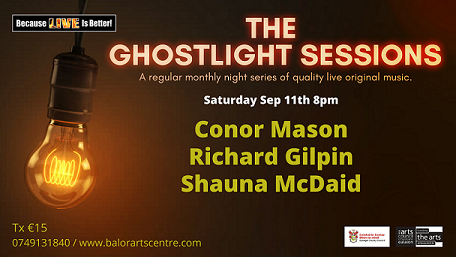 His most recent album ‘On The Surface’ was shortlisted for the NI Music Prize with singles receiving widespread radio play including BBC Radio 1 and BBC 6 Music.

Originally from Belfast and now living in Raphoe, Richard Gilpin brings a wealth of musical experience and talent to the stage. His musical output to date is an impressive blend of Reggae, Blues and Traditional Irish music.

He released his remarkable solo album Beautiful Mistake (featuring Henry McCullough and Ted Ponsonby among others) in 2002. His second album entitled 33 was released the following year and won album of the year on Radio Spazio, Italy. His third studio album Loose Ends was recorded in 2007 and featured an appearance by Peter Wilson (aka Duke Special).

This kind of talent rarely fades – Hot Press
One of the most original singer/songwriter/guitarists I’ve heard in a long, long time – Henry McCullough

Shauna McDaid’s distinctive blend of rich, soft and powerful vocals add a haunting beauty to her traditional and folk noir stylings that linger in the air long after the last note has been played.

This is Shauna’s first gig since March 2020 where she opened for Jack L in An Grianan Theatre, Letterkenny.