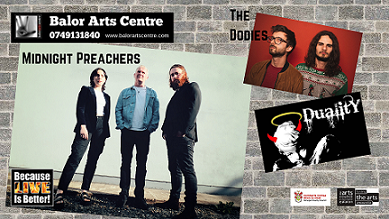 The Midnight Preachers are a beefy, dirty blues rock 3-piece from the North West of Ireland. Their sound is a blend of rich vocal harmonies and thundering, bluesy guitar riffs with one foot in the present and another firmly in the classics with influences as diverse as Janis Joplin, Fleetwood Mac and Queens Of The Stone Age making themselves heard.

The Dodies are a garage rock duo from the southern desert of Israel. Yoni Avittan fronts the group as lead vocalist and guitarist while Ran Aronson simultaneously plays bass lines on keyboard with one hand while playing the entire drum kit with the other (while also providing backing vocals!) Their debut album It’s One Hell Of A Ride was co-produced by Ron ‘Bumblefoot’ Thal (Sons of Apollo / ex Guns N’ Roses).