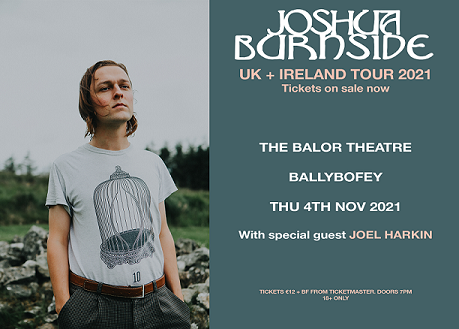 He released his debut album ‘Ephrata’ two years ago via Quiet arch Records. A mix of Irish traditional, European folk and Americana, it earned Joshua the ‘Best Album’ award at the Northern Irish Music Prize.

His latest album Into The Depths Of Hell was released last year and saw Joshua use post-punk and electronic recording methods to push the boundaries of his beloved folk music.

Says Joshua: “I have a lot of new songs that I haven’t had the chance to perform live yet, songs from my latest album ‘Into the Depths of Hell’ and other releases. Can’t wait to be back on the road, and to see to see ye all again – singing, drinking, dancing in a basement venue, old church, festival tent or pub.”

Opening act on the night will be Belfast based Donegal native Joel Harkin – himself no stranger to The Balor having held his own EP launch here back in February 2018.