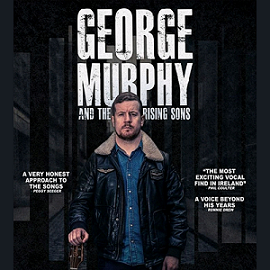 George Murphy made his mark on the Irish music scene with a memorable appearance on the RTE TV show You’re A Star where his rendition of classic songs by Luke Kelly wowed the nation.

He’s since released 4 studio albums – Dreamed A Dream (Sony), So The Story Goes, The Ballad of Archie Thompson and, most recently, 2016’s Shadowman: The Stables Sessions. He’s also toured extensively with The High Kings filling the vacancy left by the departure of Martin Furey.

In 2018 George decided to tour his music and put together a top notch 8 piece musical collective – mixing electric rock guitar and bass with whistles and bodhrans to produce a rich, full, unmistakable sound.
They have since released the live album The New Beginnings Tour and singles Darndale to the States and Dublin Inspires – written to lift spirits during lockdown and reaching #2 in the charts.
He appears at The Balor as part of a 20+ date Irish tour in advance of the release of a new studio album later in 2022.