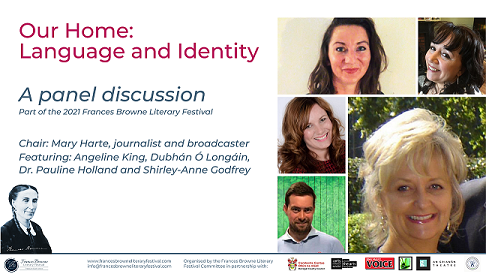 How does language and culture shape our concept of home, in the context of Browne’s work, and in our own experience?

Chair: Mary Harte
Mary Harte is a former BBC journalist and producer. She contributes regularly to RTE Nationwide. Mary is a History and Politics graduate and has an MA in Archaeology. She is Chairperson of Donegal East Tourism.

Angeline King
Angeline King, writer in residence at the University of Ulster, is the author of three novels, ‘Dusty Bluebells’ (2020), ‘Snugville Street’ (2015) and ‘A Belfast Tale’ (2016). She was selected as one of Libraries NI three emerging authors in 2017 and has received two Arts Council of Northern Ireland awards. Angeline worked in international business for 20 years and lives in her beloved hometown, Larne, with her husband and children. She has a BA Hons in French and Modern History from Queens’ University Belfast, and an MA in Applied Languages & Business from Ulster University

Pauline Holland
Dr Pauline Holland was awarded her PhD, which featured ground-breaking research establishing Cavan poet Charlotte Brooke as the foundress of Anglo-Irish literature, from the University of Ulster in 2014. It has since been published by the British Library. She is the author of Treasure Each Voice, a 400-page anthology of Ulster-Scots, Irish and English prose, poetry and song spanning the 18th, 19th and 20th centuries. The work, which includes a story of Frances Browne, is the first of its kind to provide a comprehensive anthology of the literature of the unique pluralist society of Ballybofey/Stranorlar and its hinterland. Dr Holland lectures on the Bronte sisters and their Irish heritage in Queens University, Belfast, and the Linen Hall Library. A native of Ballybofey, Dr Holland has co-edited Sarah Leech: The Ulster-Scots Poetess of Raphoe, Co. Donegal. She has appeared on BBC’s TV series Languages of Ulster as a leading authority on Leech’s poetry.

Shirley Anne Godfrey
Shirley-Anne Godfrey is a PhD candidate at the O’ Donoghue Centre for Drama, Theatre and Performance studies at the National University of Ireland, Galway. A Government of Ireland Research Council Scholar, she is developing theatre practices to recover the legacies of marginalised Irish women writers in relation to the plays of Lady Augusta Gregory (1852-1932) and the writings of Frances Browne (1816-1879).

Originally from Stranorlar, Shirley-Anne writes plays under the name Bonner. She was chosen as part of the Lyric Theatre Belfast’s New Playwright’s Programme 2018/2019. Her first play Frances Brown: In My Mind’s Eye had rehearsed readings at the Lyric Theatre, and at the American Irish Historical Society, New York, at the Origins Theatre, First Irish Theatre Festival in January 2019.

Her new play Legends of Ulster, an adaptation of Brown’s legends is premiering at the Balor Theatre in October 2021, and will also be performed in the Abbey Arts Centre Ballyshannon. In My Mind’s Eye is in development for full production by An Grianan Theatre for 2022 and will receive a rehearsed reading at this year’s festival.

Dubhán Ó Longáin
Dubhán Ó Longáin (Duane Long) is a PhD researcher at Ulster University, a poet, an Irish teacher, and a teaching assistant at the University of Limerick. He is from Ballybofey, Co Donegal originally but now lives in Limerick. He mostly writes poetry and short stories and his first collection of poetry, IDEO Locator, was published by Coiscéim in 2020.