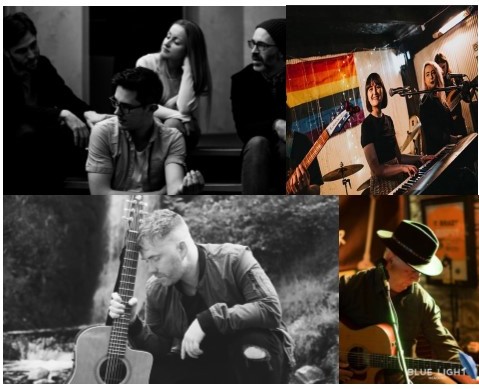 Pine The Pilcrow’s stunning, spellbinding ambient folk has been described by The Irish Times as ‘Gentle and cinematic, bittersweet and moving’. They released their debut EP in March 2016 and haven’t looked back. They’ve been nominated for an IMRO award and been put on Nialler9’s, The Thin Air’s and The Last Mixed Tape’s best of 2016 lists winning a Readers Choice award for Best EP to boot. They’ve become a wanted name playing all the major venues around the country. Allow this band, born with a sound all of their own, to sweep you away with delicate harmonies and heartfelt songs.

Derry based songstress Emily McCormick fronts Bairie a band boasting an eclectic mix of influences. Their music can be described as ‘melancholic folk’ with hints of neo-soul, psychedelic rock and heavy undertones of folk and jazz. The release of a debut single – Mr Green – sparked much interest and intrigue leading to a live performance on Electric Mainline for the launch of the City of Derry Jazz Festival and gigs supporting the likes of Duke Special and Ryan Vail.

Patata (Shane Devlin) is an open, honest and diverse songwriter and performer. His songs draw on raw emotion delivered through a prism of folk, rock, pop and jazz influences, his soulful, mellow voice a perfect complement to the innate musicality of his songs.

Singer songwriter Gerry Hodgers hails from Slane in Co. Meath where he run’s The Purple Sessions in Boyles pub for over a decade. Inspired by legends likeGuy Clark ,Bob Dylan, Simon & Garfunkel & Leonard Cohen his finger style guitar with open tunings and chord voicings perfectly express the evocative emotions of his music – the everyday emotions we all feel if we choose to just listen a bit longer.