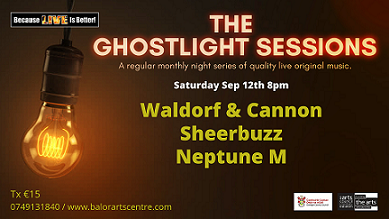 The definition of independence, they write, record, produce and mix via their own label, shoot and edit their own videos, build their own website and book their own tours. Their debut album ‘Old Dog New Tricks’ has been played not only over the UK an Irish airwaves but everywhere from the far reaches of Russia to west coast America.

Donegal indie/alt-rock 4 piece Sheerbuzz have been playing together in various projects since they were 13. Their fully independent, crowd funded debut EP ‘All Our Time and Money’ was one of the most streamed independent Irish releases of 2019 with over 130k Spotify plays.

Building on their success they’ve headlined at the Earagail Arts Festival and opened for In Their Thousands annual An Grianán concert. 2020 has seen the release of two singles – Darkside and Who You Are – as well as a live and socially distanced set for the Regional Cultural Centre’s Alone Together event in June.

Letterkenny’s Neptune M captivates and stirs her audience with a repertoire of lyric led numbers. Her voice – at once sweet, intimate and angelic, then powerful and impassioned – demands attention while the soft electric guitar that typically accompanies it provides a perfect foil. Influences include Jeff Buckley, Leonard Cohen, Nina Simone and Bjork. She is currently recording her debut EP due for release in the near future.