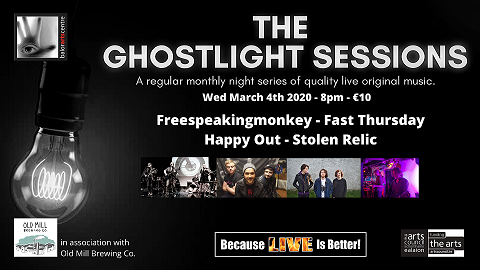 Fronted by Ciaran Rock (guitar/vocals) with Brian Sweeney (Guitar/Banjo/Keyboard), kila’s Dee Armstrong (Violin/Banjo), Henry Pearse (Bass/Mandolin) and Scotty (Drums) Leitrim-based Freespeakingmonkey’s sound has been likened to ‘ThePixies produced by Tim Burton’. Ranging from dark and ethereal to upbeat and contemporary they most definitely belong to a genre of their own. They’ve played Electric Picnic’s Body & Soul 3 times, Knockanstockan and Palfest 2019 at The National Stadium. Their debut 4 track CD entitled Sirens was launched in The Glens Centre, Manorhamilton last year to a rapturous response.

Fast Thursday are a loud, energetic Hard Rock/Alternative 3-piece from Northern Ireland who’ve gigged in pubs, bars and clubs the length and breadth of the country. This drums guitar, bass trio have released two Eps to date with the most recent – Unite The Factions –  followed by an extensive UK tour across the UK with a smattering of Irish gigs thrown in for good measure.

Having cut their teeth playing bars, parks, festivals and anywhere in between, post-indie rock trio Happy Out have chiselled themselves into a force to be reckoned with in the Donegal/Derry scene. Recent exploits have seen the band perform to enthusiastic audiences in Derry, Omagh and Donegal along with a slot supporting Titus Andronicus and festival dates at Swell and Stendhal Festivals.

Stolen Relic are a brand new original rock band from Letterkenny. Members Fiachra O’Donnell (Vocals), Stephen Tourish (Guitar), Paul McGill (Bass) and Terence McCann (Drums) travelled the four corners of the globe before returning to their native Donegal to play some quality rock ‘n’ roll! They released their Demo EP “Demonstration Violation” in August to a packed house and fantastic responses to gigs so far have marked them firmly as ones to watch.