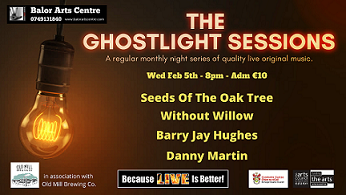 Seeds Of The Oak Tree are a Derry based 4 piece folk rock band with blues and country influences. Fronted by Conall McGrellis on vocals and guitar (he also handles the songwriting duties) the quartet is completed by Rosa Walsh on bass and backing vocals, James Graham on lead guitar and Aaron McLaughlin on drums.

Acoustic folk duo Without Willow (Karen Kelly and Simon McCafferty) are firm favourites of the Donegal Music Scene. Blending haunting, heartfelt vocals and virtuoso guitar playing their songs have gotten them to the final of the IMRO Christie Hennessy Song Contest twice – most recently with The Heather Field in November 2019. Past performances include opening for Mick Flannery, Declan O’Rourke, Moya Brennan and fellow Donegal band Little Hours.

Co. Monaghan based Barry Jay Hughes has been working hard in recent years carving his own style of Rhythmic folk and Alternative Rock. A consummate live performer, Barry Jay’s “Acoustic, Live & Honest” album was released in November 2017 followed by a Winter Tour of Ireland & UK.

17 year old West Donegal singer-songwriter Danny Martin – formerly one half of the duo Danny and James (who previously played The Ghostlight Sessions in January 2018) – has supported bands of the calibre of Little Hours, Hudson Taylor and Keywest. Influences from the lyrics of Springsteen to the guitar playing of Paul Brady are evident in lyrics, harmonies and hooks reminiscent of Picture This and The Script.