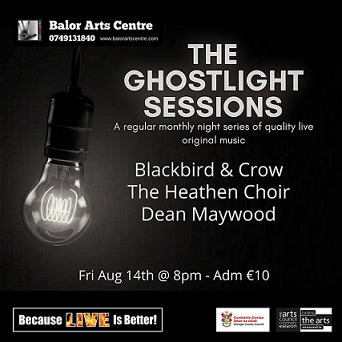 Any list of great current Donegal bands must surely feature Blackbird & Crow at or near its top. The duo of Maighread Ni Ghrasta (vocals) and Stephen Doohan (guitar/bouzouki/stomp box) fuse American blues, folk, rock and country with a distinct Irish folk twist to create a unique and powerful sound. Honest, raw and poetic in equal measure, a reputation forged through formidable live performances has been enhanced and introduced to an international fanbase with last January’s release of their critically acclaimed second album Ailm.

The Heathen Choir is the stage moniker for Strabane based songwriter Darren Doherty whose melodic brand of alternative rock (think Idlewild, REM, Alanis Morissette) has graced the Ghostlight stage on two previous occasions. Darren has over 20 years of writing, recording and touring, numerous singles on BBC Radio 1 and performances at major festivals including T-Vital under his belt. This is a great chance to see him passionately singing his truth stripped down and solo in the intimate Ghostlight Sessions atmosphere.

Ghostlight Sessions curator and host Dean Maywood brings his guitar with him this month so prove that not only does he talk the talk as MC – he can also walk the walk as a performer. The 12 months immediately preceding the March lockdown saw Dean’s star firmly on the rise. His self-titled Dean Maywood EP was released in May 2019 receiving wide radio coverage with regular plays on RTE and BBC as well as in the US and Canada backed up by a slew of well received reviews in online and print publications. On the back of the EPs success Dean was selected as one of only 48 from across the world (and the only Irish act) to play at the prestigious AmericanaFest in London last January as part of the Americana Music Association UK conference and festival.