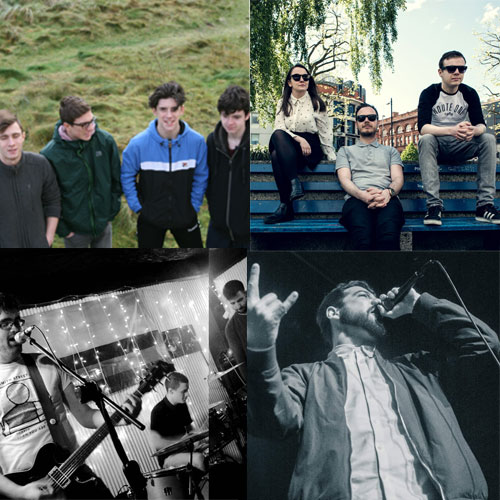 Sheerbuzz are a Donegal based indie alt-rock 4 piece. Although only formed in August 2017 they’ve already performed their versatile high energy set to sold out crowds in Derry’s Nerve Centre (twice) and the RCC Letterkenny. Their debut EP All Our Time And Money recorded in Terry McGinty’s Valley Studios reached the 100,000 plays mark within weeks of it’s release marking them out as one of the biggest young bands in the country.

Strabane native Darren Doherty has been tipped for musical success since he was 11. An eventful career path sees him back home in Strabane by way of Belfast and Glasgow with his latest project The Heathen Choir featuring his brother Martin (percussion) and Strabane songstress Lauren Bird (keys and bass). The music is a mix of life affirming rock (Oasis, REM) and progressive influences such as Pink Floyd, Rush & Joni Mitchell all tied together with an unmistakable Northern Irish accent and a penchant for poetry and honesty. One of the most popular acts to appear in Ghostlight 2018 we’re delighted to bring him back.

With their own brand of emo-tinged punk rock, heart-on-their-sleeve lyrics and catchy upbeat tunes Donegal based 3 piece Fierce Pit Bosses are making a name for themselves on the Irish alternative rock scene. Their first single Sharks In The Bathtub was released in October 2018 with the EP of the same name in January 2019.

Hip-hop artist/singer/songwriter DK blends rapping and singing with hard beats and controversial lyrics while telling a story though rhymes fast and slow. He’s dropping five projects over the summer with just released debut album Chemical Slowdance to be followed by 4 mini projects/Eps.